I decided to take a new direction with my blog by highlighting certain individuals who have made an impact on my life. These are people who have made emotional and mental impacts on me and steered the direction of my LIFE. To that I feel I owe it to them to tell the stories.

Joseph Raymond Lucero
Gang member turned Actor. This is a Cinderella story if I have ever seen one…

He was just a boy who was a product of his environment, created by his mother and father, with aspirations to change his original form to something great. He wanted it for himself, and later as an adult, for his children.

“I was arrested and sent to juvenile hall for the first time at 8 years old for burglary, then I had a couple of assaults which sent me to another juvenile facility, 3 times I was sent to Rites of Passage in Nevada, then to Gladiator School California Youth Authority, finally to California State Prison. ” Joseph recalls.

His life was spiraling out of control. When all you know is being behind locked doors, it became a trigger for anxiety. His earliest memories are of his mother selling heroin from the house and his father involved in gangs.

Joseph was incarcerated from age 12-19, then 37 days after that release was sent back for another 6 years.

“I grew up with no color lines. We were all poor at the welfare office. It was white, black, yellow, brown, orange… pink. I would watch Facts of Life, The Cosby Show, Silver Spoons. To me, that was something I wished for.” That just didn’t happen for the boys in the ghetto where the social norm is to teach your kids what streets they can walk on at night because of the fear of retaliation or just catching a stray bullet… the social norm to wear a certain color and represent a neighborhood as if the world around them is a threat… which in most cases in the hood this is a reality.

So is it their fault to believe wholeheartedly this is all that life has to offer? Have you personally ever felt that kind of protection of love from a complete stranger? Knowing they would catch a bullet for you, even kill another man in your honor. Sounds familiar to something a Veteran would say. It’s seriously a similar feeling, camaraderie and situations… some of these gang members are living a life and death reality.

By no means am I glorifying Gangs. I am making the correlation between comments made and what I have seen growing up around it. I understand why people wanted to be a part of something. This was a daily reality for Joseph growing up in his area.

This similar story is heard all over in heavy gang related areas. It’s so common that I personally, as the writer of this story, have seen it in my own areas. I was fortunate enough to have a father who walked away from that life at a young age and stepped into the military. The Military changed him and it made him realize there is more to life then the streets. He was able to project those ideas to me in such a profound way I was able to see past the streets and focus on bigger dreams. Joseph wasn’t as lucky, as he started soaking in his surrounding and started down a hard road by 8 years old. Jospeh’s desire to be a dad and have a normal life changed that direction while he was still in prison.

“I went to this 12-step group based on a lifestyle addiction and I surrendered. I found a sponsor and went through the 12 steps. I started to have hope and started to learn my belief system was misguided. I was released April 8, 2003. I started to carry this message of “Change Is Possible” thanks to the love and support from the first man who taught me about myself, Richard Mejico, second to the man whom I call Pop. Then Father Greg Boyle gave me the opportunity and the platform to prove myself and to become a real man by working at Homeboy Industries.” From repping his set, to being on set, just one of many success stories to come out of Homeboys Industries.

Onto a new life… chasing a new high. Joseph’s first taste of acting was a Blockbuster hit, ‘Gridiron Gang’ with The Rock and Xzibit. “The writer, Jeff McGuire, who was a God send, chose me and wrote me in as (Chavez #25), the heavily tattooed kid. And since then, I’ve been chasing that dream.”

You see, Joseph didn’t know there was a possibility for him to be in the world of acting. “Hollywood” was unrealistic… this wasn’t what little boys growing up in the hood were lead to believe. The tv shows like the Cosby’s and Silver Spoons where just that, a fictional family behind a television screen, they were like an addiction. He feigned for his next hit, his next line. Hitting lines took on a new meaning and giving everything he gave to the streets, he now gave to this art.

We crossed paths on the set of a well-known and wildly anticipated spinoff of Sons of Anarchy Mayans MC. I was on the path to new beginnings and challenges when I met this man. My first impression was that I suspected some gang affiliation and possible prison time based on tattoo identification and his mannerisms. Understand that this wasn’t me passing any judgment. I grew up around plenty of dudes who took the same path Joseph did. But I noticed something different. Imagine me, an ex- LEO and Corrections Officer in a room of actors and ex- convicts.
I wasn’t sure if I would be accepted in the group. I wondered if I would be excommunicated once they find out my background. Would they look at me and assume I lived a similar path they did based on my looks? Actually it was the complete opposite. They treated me as an actor. We all knew the kind of opportunity this was for our current lives and the doors this can potentially open. Joseph and I were there for the same reasons, a chance at a new life. Mine was just as much a dream as his. We both took different paths to get here, but that’s neither here nor there. We have a life of experiences that help us draw emotions for this craft, a life that we can now appreciate the hardships and pain it took to get here. Joseph is just another person who I somehow managed to cross paths with and who has made a major impact in my current life.
Joseph, thank you for your profound honesty and determination, it gives me more energy to keep on with my mission. CHANGE IS POSSIBLE! Joseph is LVNPROOF, which is his moniker that he uses to promote positivity in his community.

“The fact is, today I’m still chasing this dream and still fighting for sobriety one day at a time. I have been sober now for two years and three months (May 3, 2015). LVNPROOF” 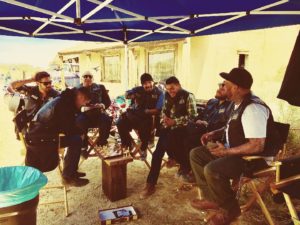